Blog
You are here: Home1 / Blog2 / Liberty3 / Declaration of Independence: Worth Reading Again and Again

Photo by Samuel Branch on Unsplash

This post has nothing to do with graphic design or marketing in a direct sense. It’s a bit off topic, so consider yourself warned. It doesn’t even have global applicability. If you are not from the United States, there’s not much here for you. My apologies. 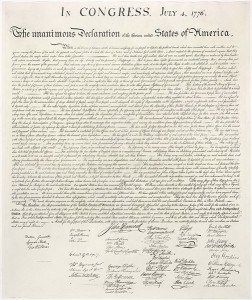 I am amazed at the seeming prevalence of United States citizens who are lacking what I would consider are the most basic of facts concerning the great nation we comprise. For instance, during a campaign cycle, if you encounter a discussion about politics, you’re likely to hear someone wringing their hands about how a particular person or policy just isn’t democratic or fair. Some people apparently don’t realize that the United States is not a pure democracy. Instead, it is a republic (look it up). And when a sitting President is able to brag to the American people about how he is proud to have bypassed Congress, that’s a sign that a lot of people have no concept of the checks and balances built into the executive, legislative, and judicial branches of our government.

Do I categorically defend the antics of a bunch of career politicians in Washington who are generally spinning their wheels, using up good oxygen and spending taxpayer money with abandon and little to show for it? Absolutely not. But it just seems there is no more sense of propriety or idealism concerning our government any more. It as if there’s nothing to live for in the political sphere. Where’s the conviction? Where’s the statesmanship that cares more about the next generation than the next election?

My annual tradition concerning the Independence Day holiday is to read the Declaration of Independence in its entirety. I’m always awestruck with the restraint and forbearance of the writers of the Declaration. Yes, they had some grievances with King George that were arguably petty, especially when one considers the scope and scale of our do-everything-for-you Federal government in 2014. But by all modern standards, the people living in the colonies had endured “a long train of abuses and usurpations” under the British Crown. I wonder, “Would I have acted with such restraint under the same pressure?” I like to think so, but I’m not sure I’ll ever know. Let’s hope not anyway. But these responses to such a seminal document are important. They awaken us to the desperate circumstances of our national origins. The spirit and resolve of the writers of the Declaration call out to us today. It is worth reading.

So here, in all it’s glory, I invite you to read the Declaration with me. I am presenting it below, copied from the U.S. National Archives and Records Administration site for your convenience and enlightenment. A complete transcript, including the signatures, appears below. You also may appreciate viewing a scan of the document. Click here for a high resolution image.

The unanimous Declaration of the thirteen united States of America,

When in the Course of human events, it becomes necessary for one people to dissolve the political bands which have connected them with another, and to assume among the powers of the earth, the separate and equal station to which the Laws of Nature and of Nature’s God entitle them, a decent respect to the opinions of mankind requires that they should declare the causes which impel them to the separation.

We hold these truths to be self-evident, that all men are created equal, that they are endowed by their Creator with certain unalienable Rights, that among these are Life, Liberty and the pursuit of Happiness.–That to secure these rights, Governments are instituted among Men, deriving their just powers from the consent of the governed, –That whenever any Form of Government becomes destructive of these ends, it is the Right of the People to alter or to abolish it, and to institute new Government, laying its foundation on such principles and organizing its powers in such form, as to them shall seem most likely to effect their Safety and Happiness. Prudence, indeed, will dictate that Governments long established should not be changed for light and transient causes; and accordingly all experience hath shewn, that mankind are more disposed to suffer, while evils are sufferable, than to right themselves by abolishing the forms to which they are accustomed. But when a long train of abuses and usurpations, pursuing invariably the same Object evinces a design to reduce them under absolute Despotism, it is their right, it is their duty, to throw off such Government, and to provide new Guards for their future security.–Such has been the patient sufferance of these Colonies; and such is now the necessity which constrains them to alter their former Systems of Government. The history of the present King of Great Britain is a history of repeated injuries and usurpations, all having in direct object the establishment of an absolute Tyranny over these States. To prove this, let Facts be submitted to a candid world.

In every stage of these Oppressions We have Petitioned for Redress in the most humble terms: Our repeated Petitions have been answered only by repeated injury. A Prince whose character is thus marked by every act which may define a Tyrant, is unfit to be the ruler of a free people.

Nor have We been wanting in attentions to our Brittish brethren. We have warned them from time to time of attempts by their legislature to extend an unwarrantable jurisdiction over us. We have reminded them of the circumstances of our emigration and settlement here. We have appealed to their native justice and magnanimity, and we have conjured them by the ties of our common kindred to disavow these usurpations, which, would inevitably interrupt our connections and correspondence. They too have been deaf to the voice of justice and of consanguinity. We must, therefore, acquiesce in the necessity, which denounces our Separation, and hold them, as we hold the rest of mankind, Enemies in War, in Peace Friends.

We, therefore, the Representatives of the united States of America, in General Congress, Assembled, appealing to the Supreme Judge of the world for the rectitude of our intentions, do, in the Name, and by Authority of the good People of these Colonies, solemnly publish and declare, That these United Colonies are, and of Right ought to be Free and Independent States; that they are Absolved from all Allegiance to the British Crown, and that all political connection between them and the State of Great Britain, is and ought to be totally dissolved; and that as Free and Independent States, they have full Power to levy War, conclude Peace, contract Alliances, establish Commerce, and to do all other Acts and Things which Independent States may of right do. And for the support of this Declaration, with a firm reliance on the protection of divine Providence, we mutually pledge to each other our Lives, our Fortunes and our sacred Honor.

The 56 signatures on the Declaration appear in the positions indicated:

I thank God there were men and women who took the responsibility seriously and pledged their lives, fortunes, and sacred honor to give birth to the Nation we enjoy today. May God bless this nation and grant us the repentance required to take responsibility for what we possess.

When Is the Last Time You Were Inspired by Marketing in the Financial Secto...
Scroll to top