Blog
You are here: Home1 / Blog2 / Politics3 / An Open Letter to Our Re-Elected Governor, Nikki Haley 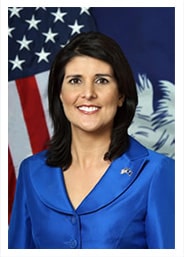 We haven’t met yet, though we almost had a chance when you visited Natty’s on Trinity Street in Abbeville last weekend. I had a birthday party to attend, and when one has the chance to take small kids to Jumping Jax, one just doesn’t decline. Ever. Even for a chance to meet the Governor of South Carolina. (sorry!)

But enough about me. Congrats to you on your re-election as Governor of the Great State of South Carolina! You earned my vote with your principled conservative stance on economic issues, your perspective on the balance of power between states and the federal government, and your refusal to take the baited hook that was the Medicaid expansion. I think your first term in office did most residents of South Carolina proud. There are a few thousand people who will be leaving the unemployment system as a direct result of your administrative priorities. Thank you for your service.

But not everyone is happy with what you’ve done (or not done) so far. I believe there will always be smoke-and-mirrors accusations that come from political opponents. These attacks are rarely more than political maneuvering, and they are rarely fair. However, one such attack caught my eye. I’m referring to the recent trouble with the S.C. Department of Social Services.

One of my acquaintances is a social worker within DSS, and he didn’t have very many kind things to say about you because of the predicament in which he and other DSS workers find themselves. Actually, he and many of his colleagues were quite adamantly opposed to your re-election. They already have a difficult, thankless job. But then they are overworked and underpaid. I’m told the case load and the resources to address it are still sorely mismatched. Let me offer a quote from a social worker who volunteered some information on the matter when I asked about it. Pardon the colorful language:

[DSS State Director Lillian] Koller called for higher standards without backing the requirements with funding or more workers. Or better working conditions. Or more supervision. Children are literally dying because we do not have the resources to keep them safe. I triple dog dare any Republican to come work for Anderson County DSS. Witness firsthand the aftermath of the last four years. Ask any employee what their opinion is. Nikki Haley does not care about children, the elderly, or the poor. To her they are numbers. She makes a big deal about veterans … but there is a war here. [My colleagues] and I go to war every day to fight for the safety of SC’s abused and neglected children. It is f*cking brutal, we get no support. We are sent into dangerous situations with no protection, and all we ask is for lower case loads and better supervision so we can actually do our jobs. Nikki Haley has consistently ignored our requests and the department has deteriorated to the extent that children are dying because the workers are responsible for so many children that kids are just falling through the cracks. Haley is ultimately responsible for what happened at DSS. She made the decisions that led to the chaos.

I read some of your remarks about the deaths that occurred and the condition of DSS which you delivered during a recent debate. As a wife and mother, you seemed to be understandably appalled and disturbed by what happened. To be fair, I would expect a senior executive such as yourself to be more keen on the numbers coming out of DSS than on the individuals and stories that comprise the caseload. And I expect that reality would bother social workers who care about their work. There’s only so much one can do, and the realities of executive leadership dictate that you must necessarily focus on metrics and fundamentals to the exclusion of the human element.

But let me offer some encouragement: now that the gubernatorial election is settled and you are in leadership for another term, please continue to take ownership of the problems within DSS. It’s no longer a campaign issue. It’s now a real-life problem that you have the next 4 years to address with real solutions. Please commit to identifying solutions that will enable the department to function well. I was encouraged to learn from District 11 representative Craig Gagnon that there were some stopgap measures taken earlier this year to increase social worker pay and improve conditions. He tells me there are additional efforts coming in the next legislative session. This is a very good thing. And those transformational efforts will need your executive leadership to ensure their success.

There are a plethora of opinions about the extent to which the government—even state and local governments—should be involved in correcting the social and familial dysfunction that DSS is tasked with addressing. I personally believe you can’t remove Godly principles from a population and not have tremendous problems. Broken families are just a symptom of deeper spiritual problems. So as far as the source the problems that manifest in DSS cases, there’s not much we can do. Can you use the powers of government coerce men to be good and loving fathers? Can you coerce drug addicts to prefer honest gainful employment to a life of addiction? Can you engineer a utopian society? Many have tried, and all efforts to date have failed. But perhaps there are non-government organizations, nonprofits and religious organizations that could be involved in carrying or at least supporting the DSS case load. What can we do to better empower and deploy these resources to help accomplish the goals of DSS? Maybe it would be inadvisable for volunteers from churches to take on cases. Many have the heart but few have the training and expertise. But perhaps a Sunday school class could “adopt” a social worker and provide support and encouragement. We don’t always have to expand government to fix things. You have helped demonstrate that in the past four years. But until the problem is resolved and alternate solutions are in place, I think we will have to fully fund DSS to match their case load.

I encourage you once again to make a priority of fixing the issues at DSS. Continue to set high standards. Install a high-quality, proven director (and I’m sure the search is already underway). Fund the organizations and people best equipped to attain those standards and serve people. Usher in a new era of effectiveness and professionalism. You have the bully pulpit. You have the authority to set the agenda and set priorities. And it looks like you will have plenty of political colleagues and citizens who will support your efforts.

I don’t hold you personally responsible for the hurtful actions of others. We humans are by-and-large hopelessly broken creatures. And goodness knows we don’t need a bigger government peering, prying, and taxing it’s way into every nook and cranny of our lives. But I applaud your efforts to make government more effective and to ensure the most vulnerable among us are offered protection.

Thanks you for listening,
Andy Johnston