Blog
You are here: Home1 / Blog2 / Tips3 / Moving Completely Over to the “Light Side” 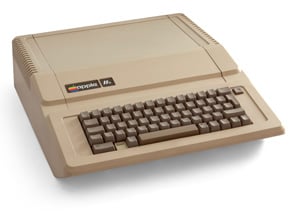 Back in the mid-1980s, my Dad bought an Apple IIe to help him manage his growing medical practice. That was the first computer I had access to. Eventually, he upgraded to an Apple IIgs — with a color monitor even! Knowing what Apple has become since the Mac and the iPhone, these tidbits of my early computer exposure now seem really cool.

But it was the 1980s. My Dad didn’t know then what Apple would later become. We surely didn’t know anything about being cool. Alas, he eventually made the decision to get a PC. I’m not sure of the exact specs, but I think the most capable PC processors in those days were the 386, eventually superseded by the 486 and the 486DX. Apple was a faint memory as we started learning MS-DOS and Windows 3.1.

Returning to My Roots

Fast forward to 2011. I had been designing for a few years with CorelDRAW 11 on a PC. My body of work included personal projects and volunteer work for my church. My portfolio landed me an interview and a temporary design job within the marketing department at Self Regional Healthcare. What was on my desk when I arrived for work? A Mac Pro with a 22″ Cinema Display. I realized after my first week that I had begun to come full circle when I tried to close a window on a Windows PC by moving my mouse cursor toward the upper left corner of the screen.

That process of moving full circle was occurring in August of 2012 as I ordered a MacBook Pro for my business. Later that same year, my son traded a small fortune for a brand new iPod Touch (5th Generation). My wife then decided she would try out the iPhone after seeing her sister enjoy hers. The following Christmas, my other son received an iPad Mini. Without realizing it and without really straining for it, we had become an “Apple family” in just a couple of years.

The latest come-home-to-Apple moment was when I decided to jump on a mid-cycle upgrade opportunity and buy an iPhone 5s to replace my aging Motorola Droid RAZR MAXX.

So far, the hardware and software has been brilliant. I did have a SIM card programming issue that Verizon fixed quickly, but everything else has been great as expected. Many of the apps I used regularly on my Droid (Zoho Invoice, Evernote, Wunderlist, Pulse, etc.) are cross-platform. It was really just a matter of installing what I needed and logging in.

All professional designers use Apple products, right? At least the good ones do. That is what I thought subconsciously. It just seemed that everybody who was producing really good work was using a MacBook or an iPad. And I guess, from all appearances, I’m perpetuating that generalization. But the truth is that while I was enjoying my new MacBook Pro, it was the PC that had put me in position to afford that MacBook.

When you observe the AJ Design mobile workspace, I have the shiny MacBook Pro. And yes, now I have an iPhone as well. But we would do well to remember that these tools are a means to an end. An Apple product never created anything. What a designer creates is far more important than the tool that he uses.

Did Amazon’s Jeff Bezos Makes a Personal Attack on the Marketing Prof...
Scroll to top