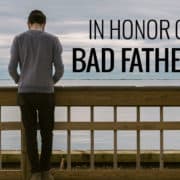 It’s Father’s Day. All across the world, kids with dads at home are waking up early to prepare crayon-and-paste expressions of heartfelt adoration for their dad.

They are in cahoots with moms and other siblings, working feverishly to get their project done so they can surprise their dad. In addition to homespun “greatest dad ever” gifts, some dads will receive power tools. Some will receive gift cards. Some will even receive a neck tie. These aren’t perfect dads, but they are good dads. They are a part of their kids’ lives. They do their best to provide and bless their family, and they are an important stabilizing factor in their household and the rearing of their kids.

I’m not writing about them today.

I’m writing about the deadbeats. The down-and-outers. The dads who have failed so miserably that their kids haven’t even spoken to them in years. I’m writing about the men that have lived up to the fears of our feminism-embracing progressive society. I’m talking about the guys who lose their temper and drink too much sometimes. I’m thinking of the men who have been dealt an extraordinarily raw deal in their work life, their health, or their family situation. There are men who are technically fathers but are unlikely to receive any sort of sincere or even perfunctory recognition on a day like Father’s Day.

This is for the bad fathers.

Am I referring to abusive fathers? No. Abusers need both consequences and repentance. I’m referring to the fathers who just have made a mess of their homes. Is everything they’ve done right? Heck no. In fact, their kids and wives (exes/girlfriends/whatever) might strain to think of anything they’ve done right. Many haven’t even done the simplest aspects of fathering right. Their kids weren’t thoughtfully and lovingly conceived into a stable home where they would be able to grow and thrive. They may not have even known a child would eventually result from that one night stand.

No matter their failures, they are still fathers.

Father have gotten a bad rap. Much of it has been earned. Fathers aren’t exactly superhumans. The are humans though. And humans are hopelessly flawed. Don’t believe me? Turn on any news or news feed. Despite the fact that fathers are far from perfect, and in some cases downright broken, there is still an incalculable power in their possession. Fathers have the ability to create life. This we know…high school biology makes it pretty clear. But in addition to that, and of far more significance, fathers have the ability to speak things to life in their children.

A quick stroll through the Focus on the Family website yields lots of content showing the things that can happen when fathers abdicate their role. I think bad fathers may see things like the correlation between fatherless and violence or poverty and feel condemned. They see the black-and-white statistics borne out in living color in the lives of their kids, and the pain is likely too much to bear. Instead of seeing a kid succeed in school or sports (and feel the pride swelling in their chest), a bad father probably has a tremendous amount of guilt to sort through. With every bump in the road their kids experience, they will wonder, “Did I cause that? Could I have done better and prevented that?” And here’s a hint: There are lots of bumps in the road for everyone.

What should you do for a bad father on Father’s Day?

The bad dads, especially those who aren’t in the home with their kids, probably aren’t too fired up about Father’s Day. It’s less than “just another day.” It’s an unescapable reminder of their abject failure. I would like to offer the kids of bad fathers a piece of advice:

“‘Honor your father and mother’ (this is the first commandment with a promise), ‘that it may go well with you and that you may live long in the land.'”

The Bible? *gasp* Yep, the Bible. Take a minute and look at what the Apostle Paul says in this passage of Ephesians. Note there is no qualification limiting the giving of honor to good fathers only. There are no barbed clauses such as, “…if he hasn’t messed things up and hurt you.” And note the sort of existential blessing that accompanies the honoring of fathers: “that it may go well with you and that you may live long in the land.” The opposite of that is pretty serious: if you don’t honor your father, things won’t go well with you, and you won’t live long in the land. What if our national stability and peace is less a function of national foreign and domestic policy and is more of an aggregate of our heeding this scripture? Is it possible that things would be different nationally, even globally, if more people chose to honor their fathers?

Honor your father. Even if he’s not a good one.

I don’t really know what it’s like to have a bad father. I have a fully human dad, but he’s a good one. So I know my advice might seem a little thin. However, considering the benefits connected with honoring one’s father, isn’t it worth a try? Doesn’t it make sense to try to follow good advice even if your emotions are telling you, “DANGER! TURN AROUND!!!” I dare say most of us have experienced being utterly lied to by our emotions in the past. What if the emotional barriers to honoring your father are cut from the same cloth?

If I were trying to honor a bad father, I would start out with honesty. There are few things worse to express or receive than obligatory honor. After that, I would try to look on the bright side and find something genuinely honorable. Find one thing you can say, “I’m glad you did that, Dad.” Then say it. Start where you can. Maybe that’s all you can do. But who knows? You might find that a singular expression of honor starts to draw out more honorable behavior from your father. And know that as you honor your father, you are setting things in motion for a wealth of blessing from your Heavenly Father.